One of the oldest scientific mysteries of the plant world as to what makes the sunflower track the sun has finally been resolved. This finding has major implications for effective tapping of solar energy. The name sunflower invariably invokes a smile, the bright yellow petals with a contrasting black at the center somehow gives the impression of a smiley the universal emoji on social media.

But to scientists the enigma was how do young buds of the plant track the sun and to what benefit. Sun is the ultimate energy bank for earth and recently the first ‘solar tree’, a solar power generation contraption resembling a tree was inaugurated by Science Minister Harsh Vardhan.

This is part of the current government’s target of ramping up solar energy to generate 100 gigawatts in the next 6 years. It has been always known that sunflower heads follow the sun, a phenomenon called heliotropism in the jargon of scientists. But till now how exactly it happens was unresolved. Now a team six American scientists working at the top notch University of California has found that it is the selective growth of the stem in one direction that makes the sunflower follow the sun. The American team studying the plant has published an elegant paper in the SCIENCE journal last week explaining in detail how this unusual plant phenomenon works and what are its evolutionary advantages to the plant.

The team reports that in the morning the head or the flower plant which is the flower will invariably face east and then it tracks the sun and at night the head re-orients itself by growing in the opposite direction so that once again in the morning the flower faces the sun. This daily rhythm is followed only by the new flowers, once they mature and seeds have been set, the flowers lock themselves in a permanent east facing outlook.

The team reports that young sunflowers track the sun as it moves from east to west because of daily or a circadian rhythm. What’s more, mature sunflowers cease this cycle and face eastward because this behaviour offers an evolutionary advantage with pollinators. While the east-to-west behaviour of maturing sunflowers is well known, the exact mechanism underlying it – be it circadian rhythm or changing osmotic pressure – has been a longstanding mystery.

In a statement, Hagop S Atamian from the University of California at Davies and the lead author who studied the common sunflower, whose botanical name is Helianthus annuus, disrupting its exposure to both sunlight and LED lights. For example, when moved to a growth chamber with constant overhead lighting, the plants maintained their directional rhythms for several days before the pattern deteriorated, suggesting that the plants were relying on a schedule dictated by circadian rhythm.

In maturing sunflowers, the researchers found that cessation of the east-to-west sun-tracking behaviour directly correlated with stem cell growth; in the same way, mutant plants with impaired growth hormones also demonstrated impaired sun-tracking behaviour. In studies, sunflower seedlings were found to respond more strongly to unilateral light in the morning than in the afternoon; the authors suggest that this sensitivity to sunlight from the east causes the plants to eventually shift to face east permanently.

The results show how temperature contributes to the differential attractiveness of east- and west-facing sunflowers to pollinators, the authors report. There are many learnings from this simple piece of research, it cost the authors almost nothing since most of the work was of an observational nature, simply designed experiments has led to resolving a long standing mystery. It is amazing that none of the Indian scientists thought on these lines to conduct experiments that needed only very minimum resources but lead to a big understanding.

By tracking the sun, the sunflower some studies suggest is able to produce 10 per cent more oil simply, similarly the ‘solar tree’ installed at Vardhan’s house is able to tap more sunlight to generate more electricity even though the solar panel are stationary in the current model. The ‘solar power tree’ developed by the science ministry harnesses solar energy for producing electricity with an innovative vertical arrangement of solar cells.

Almost akin to the architecture of a tree, with central trunk and solar panels acting like large leaves. It thus reduces the requirement of land as compared to conventional solar photovoltaic layout, on one hand, while  keeping the land character intact on the other. Even the cultivable land can be utilised for solar energy harnessing along with farming at the same time. The innovation finds its viability both in rural and urban areas.

Vardhan noted that in order to produce one megawatt of solar power, it requires about 1.4 hectares of land in the conventional sequential layout of solar panels. Thus, to generate copious quantities of green energy, there will be requirement of thousands of hectares of land. Acquisition of land is a major issue in itself, he added.

Girish Sahni, Director General of the Council of Scientific and Industrial Research (CSIR), says as a future prospect, the ‘solar power tree’ would be developed in a rotatable module, which would have a motorised mechanism to align itself with the movement of the sun during the day. Hence, it would be possible to harness more power over and above the current capacity.

Researchers have developed a potentially game-changing solar cell that essentially does the work of plants — converting atmospheric carbon dioxide into usable hydrocarbon fuel using only sunlight for energy.

“The new solar cell is not photovoltaic – it’s photosynthetic,” said senior study author Amin Salehi-Khojin from the University of Illinois at Chicago.

“Instead of producing energy in an unsustainable one-way route from fossil fuels to greenhouse gas, we can now reverse the process and recycle atmospheric carbon into fuel using sunlight,” he added.

While plants produce fuel in the form of sugar, the artificial leaf delivers syngas, or synthesis gas, a mixture of hydrogen gas and carbon monoxide. Syngas can be burned directly, or converted into diesel or other hydrocarbon fuels.

The ability to turn CO2 into fuel at a cost comparable to a gallon of gasoline would render fossil fuels obsolete.

Chemical reactions that convert CO2 into burnable forms of carbon are called reduction reactions, the opposite of oxidation or combustion.

Engineers have been exploring different catalysts to drive CO2 reduction, but so far such reactions have been inefficient and rely on expensive precious metals such as silver, Salehi-Khojin said.

“What we needed was a new family of chemicals with extraordinary properties,” he added in a paper published in the journal Science.

The team focused on a family of nano-structured compounds called transition metal dichalcogenides — or TMDCs — as catalysts, pairing them with an unconventional ionic liquid as the electrolyte inside a two-compartment, three-electrode electrochemical cell.

The best of several catalysts they studied turned out to be nanoflake tungsten diselenide.

In fact, the new catalyst is 1,000 times faster than noble-metal catalysts and about 20 times cheaper.

The technology should be adaptable not only to large-scale use, like solar farms, but also to small-scale applications, Salehi-Khojin said.

It may prove useful on Mars, whose atmosphere is mostly carbon dioxide, if the planet is also found to have water.

More than one million homes now have solar panels, helped by government subsidies and clean energy policies. Falling equipment prices and competition among installers have driven the average price of a home solar system down 10.6% over the past year to $3.21 per watt, or $16,050 for a five-kilowatt solar array. A federal renewable-energy tax credit can shave another 30% off the total cost. 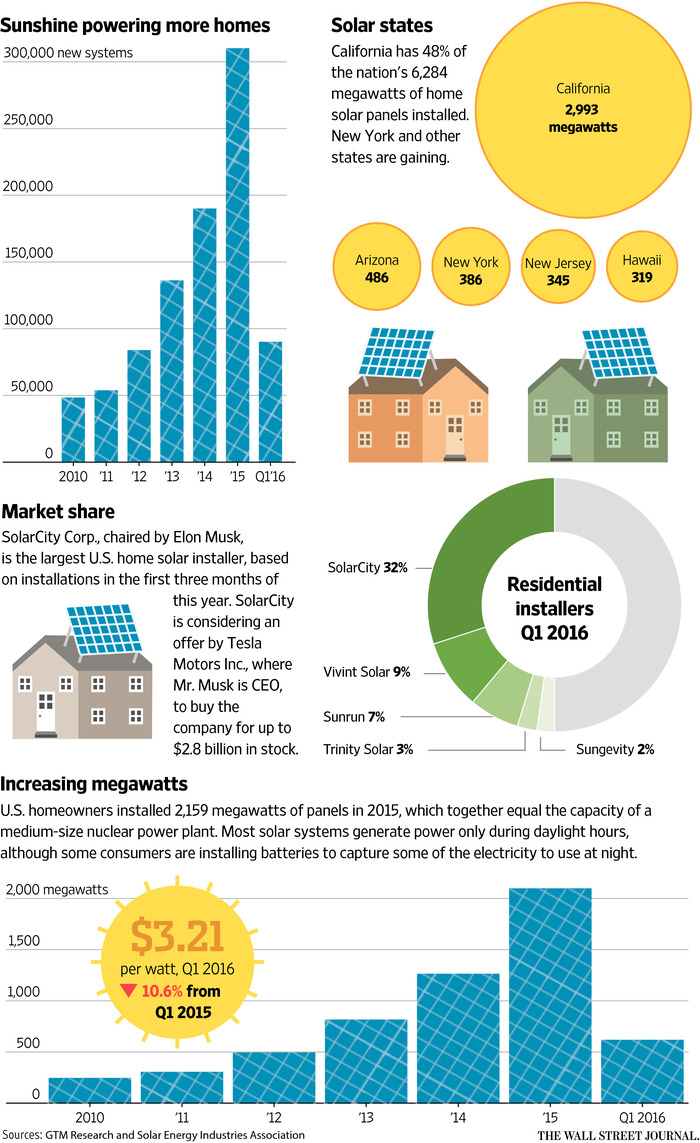 Our traditional energy resources, including electricity, may not be sufficient to satisfy the current demand. Due to the imbalanced demand-supply cycle, the prices of electricity are touching all new heights. Either you can continue to pay these prices or opt for solar energy, which is comparatively cheaper and can satisfy your electricity demand for decades, if not more.

The process to switch to solar energy is quite simple. All you have to do is install a solar panel at your home or factory. That’s It!

The biggest problem that most people face is the lack of awareness about solar energy and solar panels. They get in touch with unprofessional people who charge exponential amount in the name of installation cost and miscellaneous expenses.

Should you want to install a solar panel in your factory or house without facing any inconvenience, all you need to do is contact ADLER Group. We have professionals with world-class expertise. They’ll come to your place, monitor it and do a free cost benefit analysis to tell you how much you can save by opting for a solar panel.

You don’t have anything to lose with us. Contact us today and request a free-of-cost plant visit.

India’s biggest energy companies are moving beyond their roots in fossil fuels to invest in renewables, backing Prime Minister Narendra Modi’s goal to build up alternatives to the most polluting forms of energy.

Indian Oil Corp., a prominent refiner, along with Oil India Ltd, are working to build a 1-gigawatt solar farm in Madhya Pradesh, according to the state agency responsible for implementing energy policy. The oil companies join India’s largest conventional electricity generators like NTPC Ltd and Tata Power Co., which are aiming to be the biggest players in clean energy.

India’s biggest oil explorer is also getting in on the game.

“We already have some wind capacities, and now we want to position ourselves big in solar,” said Dinesh Kumar Sarraf, chairman of Oil and Natural Gas Corp. “Investments in renewable energy are not for mere demonstration, but also because of business reasons. We are working towards giving renewables a reasonable share in our overall business mix.”

Modi’s support, along with a plunge in the cost of wind and solar technology, is making more renewable projects economical to develop. That’s making clean energy a bright spot in an industry where state power retailers are struggling to pay their own bills after amassing Rs.2.5 trillion ($37 billion) of debt.

“More renewables than coal power will be built in Asia over the next 25 years, and most of it will be built by these big conventional power companies,” said Justin Wu, head of Asia and Pacific for Bloomberg New Energy Finance in Hong Kong.

The Indian companies are catching up to counterparts in Europe and Asia, where big energy companies have already moved into renewables. China Guodian Corp., the nation’s fourth-biggest conventional power company, is the largest wind-asset owner in the world through unit China Longyuan Power Group Corp. Other leading renewables developers include utilities Enel SpA of Italy, Iberdrola SA of Spain and Finland’s Fortum OYJ.

In India, companies are just starting to recognize the opportunity.

Government-owned NTPC, India’s largest power generator with coal-based installed capacity of 35 gigawatts, intends to transform itself into the largest green power producer in coming years, according to its website. NTPC and its power-trading subsidiary, NTPC Vidyut Vyapar Nigam Ltd., also act as the buyers for most solar auctions sponsored by the central government.

Indian Oil is planning to consume part of the clean energy produced for their own refineries and sell the remainder to other public sector enterprises like Steel Authority of India Ltd, said Manu Srivastava, managing director of Madhya Pradesh Urja Vikas Nigam Ltd, the agency that’s implementing renewable policies in the province.

“The state government will provide land to the oil companies for this project and we’re looking at district Chhatarpur for the same,” Srivastava said.